January 19, 2012
It began as an ordinary day.  A nice sunny cold winter's morning.  I went out for a wander to inspect the garden before deciding what I would do first in the day and then came back in for a cup of tea.  Tea is the fuel that keeps me going.

When I walked into the lounge Lawrence-cat was up to something and making that singing noise that cats make when they have a mouthful of something they shouldn't.  He turned and looked at me a little wide-eyed and dropped the mouse onto the floor.  Unusually for Lawrence, the mouse was still very alive and made a dash for it.  In the mean time I had run to the conservatory door as the nearest door to the outside and opened it.  I shouted at Lawrence (there may have been expletives involved) and Lawrence grabbed the mouse again quickly.  I grabbed Lawrence and made to eject him and mouse through the open door.  Lawrence then dropped the mouse again and it made a better dash for it.  Before you could say "for F sake Lawrence pick it up!" it had disappeared under the sideboard.

This I did not want.  I did not want the mouse dead, but I did not want it in my house.  Lawrence took up residence in front the sideboard waiting for it to emerge.  There was little I could do so I left things as they were for now, confident that in a house with four cats they would deal with the problem faster than I could buy a humane mouse trap.

I do not condone Lawrence's killing ways.  Of my four cats he is the only one with any inclination to hunt at all.  Geoffrey is too old and was always too lazy, Austin has had her moments but these days she is more concerned with keeping warm and keeping away from Chesney.  Chesney is too fluffy and bouncy, really he ought to be called Tigger, in fact all the time I do believe this is what he is singing: "The wonderful thing about tiggers / Is tiggers are wonderful things / Their tops are made out of rubber / Their bottoms are made out of springs / They're bouncy, trouncy, flouncy, pouncy fun, fun, fun, fun, fun / But the most wonderful thing about tiggers is I'm the only one / IIIII'm the only on!" (The House at Pooh Corner, AA Milne 1928).  Substitute the word Chesney (for he is the one and only) for the word Tigger and now you know why Austin avoids him as much as possible.  So, Lawrence is the only hunter.  He spends a lot of time by the compost heap - waiting, waiting.  He has had a collar with a bell on it, it seemed to attract the birds so I had to remove the bell.  It is one of the more unpleasant sides of cat keeping that some will hunt, it does not please me.

In honesty I sort of forgot about the mouse after a day or so.  I imagined that Lawrence had had it as he was taking little notice of its hiding place any more and the lack of remains or evidence was not a sign that it was still alive.  Lawrence rarely leaves a trace (though he does leave piles of vomit - anyway, moving on swiftly.....)

Fast forward to the next Friday.  I get downstairs to the kitchen and find this... 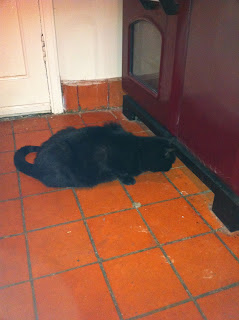 I then knew for certain the mouse was alive and well and under the oven.  I had to get to work so left him to it.  When I got home he was still there.

I then fed the cats and whilst they were all busy eating suddenly the mouse appeared.  It ran across the kitchen and into the dining room.  This was not a great development and I was not too pleased at this.  I decided I had to deal with the mouse issue in some way (I had no plan at all).  I thought it was shut in the dining room, but no, somehow it had got into the hall (limboed under the door I reckon), my son opened the front door and puf, like Keyser Söze the mouse was gone.