December 08, 2011
In May this year I went to Chelsea Flower Show with my friend Michelle.  We don't see each other all that often, but when we do we have a great time.  On and off we've been going to Chelsea together now for about ten years. 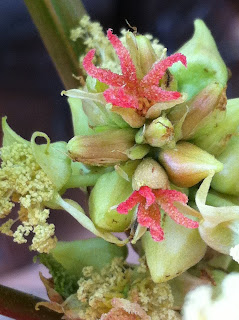 When Michelle arrived at my house she had a plant with her she had brought for me as a gift, a Ricinus; she had grown some from seed and this was one of them.  It is a not a plant I have ever grown before but I liked the leaves so I potted it on and put it in the conservatory at first.   It grew - and it flowered.  I was very pleased with it. 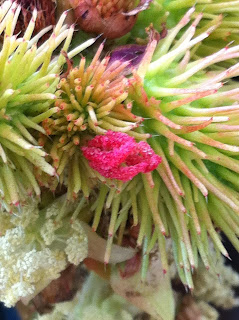 Then Austin, who is a interesting cat at the best of times, decided that this was the plant she was going to use as a cat litter.  None of the other plants in the conservatory would do, this plant was the one.  So the plant had to move outside as that was something I could not put up with.  However, despite this blatant attempt to poison it, the plant continued to thrive, flower and then joy of joys produce seeds.

What amazing seeds they are - they look like lucky beans!  So beautiful.  I sowed a couple and saved the rest for next spring. 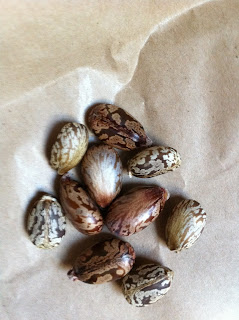 Imagine my joy when I saw one had germinated.  The original gift is still going strong, and now its produced potential gifts of its own. 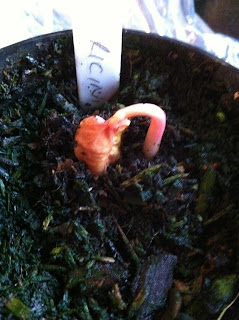