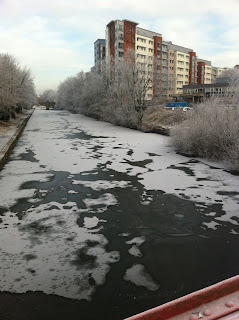 As a keen user of Twitter I have been reading a variety of messages referring to the extreme cold we were experiencing this time last year, so I thought I would have a look and see what I was writing in my garden journal this time last year.

By November 24th last year my pond was frozen and I appear to have got outside in the garden in fortnightly intervals.  By the 10th December we had had temperatures of -11 at night but then we had a thaw which allowed me to plant out my rose order which had been sitting in the greenhouse for quite a while waiting for the ground to defrost, a definite difference from this year.  The bulk of my rose order last year was ten Rosa Hyde Hall, a replacement for the yew hedge that refused to thrive, or putting in bluntly: died the first time I planted it.  I replanted it again with yew and again it died, all of them, all ten yews both times.  At that point patience and inability to keep throwing good money after bad meant I changed plans.  Admittedly one of the Rosa Hyde Hall plants died too this year but the other nine grew well and flowered beautifully so I expect great things from it next year.

By the 24th December we were heading for the first white Christmas I could remember for many years.  We had snow and the garden was frozen solid.  It took until the 15th January before I was getting out and back into the garden swing of things, but for a period of time there it felt like I was living in Narnia during the 100 Years Winter.  It was incredibly beautiful but the world felt static.  The ground was so frozen and everything felt still.

As I write this the garden is frozen, the top layer of water in the pond is frozen and we are getting frequent frosts and also cold cold rain.  This morning we had the first excitement of snow, the first settling of the year, a thin layer that hardly covered the ground but snow nonetheless.