September 09, 2011
Its been dry this year.  Back in May I wrote a post about how little rain we had had up until then.

The year has continued much the same.  We have had occasional days of rain, but then heat and breezy winds that have dried things up again remarkably quickly. 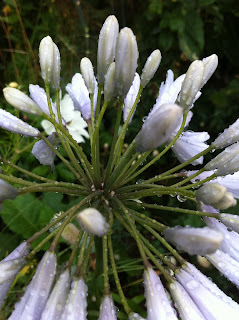 I expect to water my new plants for a while in the first year, but even established planting has suffered greatly at times.

I did manage to keep my vegetable patch productive with better watering than I managed last year.  That has been a positive thing this year.  Yet the constant feeling of not enough rain has occupied me greatly, or should I say obsessed me.  Its not that I don't like sun, I love warm sunny days, but I love my garden too and it has suffered so much this year. 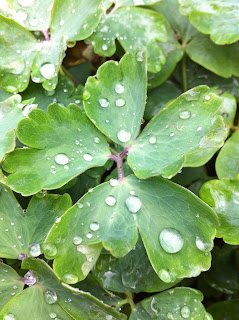 Last year: January to July saw us having 235mm of rain*, this year so far we have had 182.8 mm of rain in the same period.  In 2009 the same period saw 343mm of rain.  Now it looks like 2009 was rather wet and in particular July must have been very wet, but you get the idea; we have had very little rain compared to other years.

So my thoughts have turned to rain goddesses.  Talaya is Caannite rain goddess, specialising in summer dew.  This is not to be confused with drizzle.  Chalchihuitlicue is an Aztec rain goddess and has a story that is rather close to the christian story of Noah's flood involving 52 years of rain to rid the world of those who are not worthy.  Not a woman to be tangled with lightly! 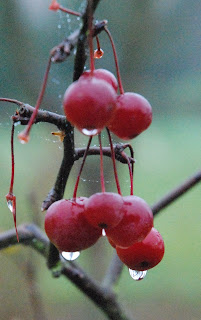 But then my mind wanders, yes I do like the idea of rain goddesses, especially if they do deliver with rain (and we don't get 52 years of flood as a result).  I also think about how much I wish I had learned to dance, a rain dance would have been so handy these past months.  All those years of pogoing just haven't had the desired effect. 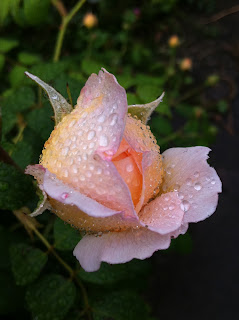 From looking back in my garden journal I can see that the pattern of rain in many ways is not that far different from recent years, just less of it.  I am hopeful that September will herald the start of rain as usual.  This will hopefully result in my pond from how it now looks like this: 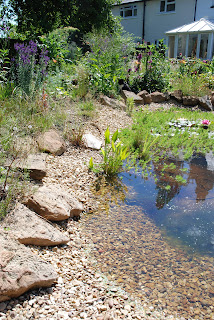 To returning to this: 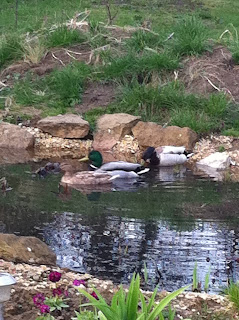 Though I won't insist on the duckage.