September 23, 2011
I have long been a fan of prairie planting, with Piet Oudolph being a major inspiration for me as alluded to in a previous post.   It has long been a desire of mine to include some prairie planting in my garden, but it has taken me a while to work out how and where.  Earlier this year it finally became more clear what I wanted to do as I finally identified the area I wanted to use. 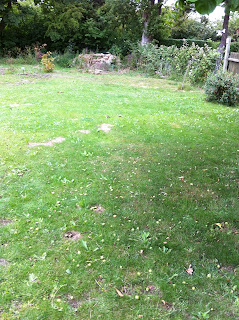 This part of the garden is quite sunny, its to the right of the pond towards the back boundary of the garden.  The other side of the pond in the left hand top corner is the meadow area, but the woodland border creates a break between the areas so I think this will work in terms of not looking too 'patchy' or jumbled. 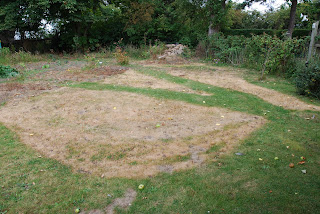 Firstly to plan our the borders I did do some rough drawing.  I am not actually someone who usually draws out actual plans of the garden, but this I wanted to be right.  Next I used the lawn mower to just cut around the areas I thought I would use as the prairie borders.  This helped me quickly see physically what the borders would look like as they were delineated by long grass.  This worked even better than I had hoped and meant I could reshape without committing a spade to the ground first.

Next task was to kill off the grass bits of the border.  I use glyphosate to do this, which I know is controversial but I have struggled badly with other new borders by the many many perennial lawn weeds that I have.  This also helped me be even more clear about what the shapes should look like. 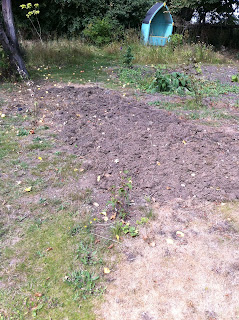 Next the digging had to commence. 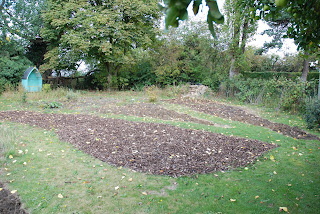 Lots of digging.  It was great when it was done and actually didn't take as long as I thought it would.  Also a bit of helpful rain was good as it loosened up the ground.

At the same time that this was going on, I was sowing seeds for the borders.  I needed to fill them as cost effectively as possible and buying fully fledged plants was just not on the agenda.  So in the green house I sowed Stipa Tenuissima (lots), Stipa Gigantica (not so much), Echinops Ritro, Echinacea Purpura and Echinacea Pallida.  I wanted to keep the amount of variety fairly limited and rely heavily on the Stipa Tenuissma as the main grass. 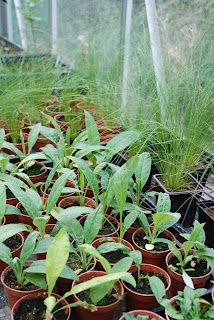 I ended up with about 60 Stipa Tenuissima plants from this, which was a good start, but probably less than a quarter of the plants I need to fill this area.  I also have been transplanting self-sown Stipa Tenuissima from other parts of the garden into these borders.  Plants for free are such a great help.  Time in the season is cracking on so the ability to sow many more and get to planting readiness means I might not get many more in this year.  I do have a second batch on the way and they have now germinated so hopefully they will get in before the frost arrives. 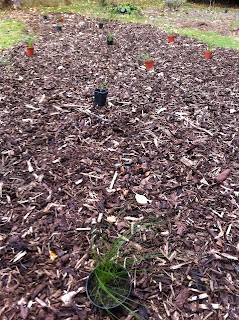 So as you can see from this photograph, clearly no where near enough plants, but I spaced them out and tried to pretend they were a crowd. 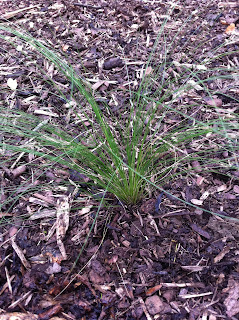 They are now all planted and seem to be thriving and I will keep you updated as to progress and there is still much to be done.....

Something keeps digging some of them up, particularly the Stipa Tenuissima.  I get home every evening and I replant one or two.  Was it pigeons I wondered?  Could it be foxes?  There are a lot around here.  Someone even suggested badgers.  Now foxes are still not off the hook on this one, but one culprit has been identified: 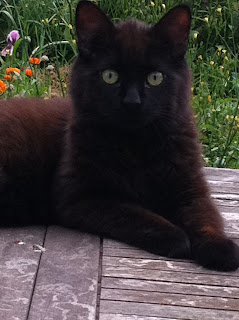 A final thought - how many people out there can start thinking about the quite old television series 'A Little House on the Prairie' and not start humming the theme from 'The Waltons' - or is it just me?