August 25, 2011
I know I have done a few posts about roses so this is the last one for this year - promise.  It was fairly obvious though I think that I had missed out one very important rose in my garden and that is Rosa 'Portmeirion' from David Austin. 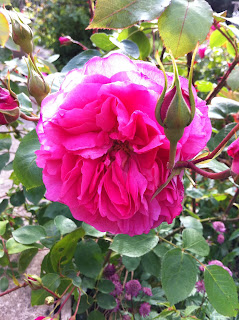 As mentioned in previous posts, Portmeirion is a very special place for me, so it was obvious that once I saw there was a rose named after it I had to have it.  I bought my first Rosa 'Portmeirion' quite a few years ago at my previous house, so when I moved I knew I would have to buy another to replace it in the new garden.  I have to honest and say it took a couple of years to settle in at the previous house.  The rose bush at my current house now four years old (bush not house), was one of the first things to go into the new garden and it has settled in extremely well.  It flowered strongly in its first year and is now maturing into a really good sized plant. 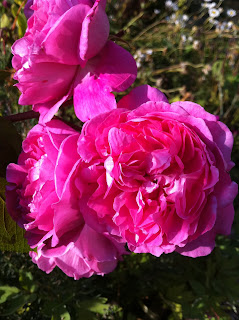 It is quite similar to Rose 'Gertrude Jekyll' in colour and in scent, so it is certain that I chose it exclusively for the name in the first instance.  It is a slightly softer pink than Gertrude, and currently a bit more vigorous as well.  Now however, I regard it as one of the best performers in my garden and clearly one of the best roses.  It is one of the first roses to come into flower and is still flowering well. 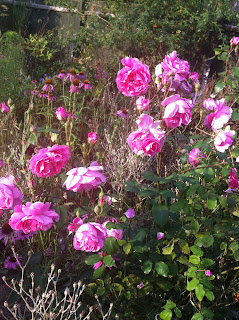 It does not suffer from the inherent mankiness that some of my other roses do so that makes it easy to look after and grow.  The first bush I bought is placed in the conservatory border, near the early evening wine drinking bench.  The scent just wafts across beautifully and I think that now, irrespective of its name, it is possibly my favourite rose.

I bought three more last year and they are coming on well, though the dry summer has held them back.  I am expecting great things from them next year.