The Yellow Rose of Texas

July 22, 2011
My father has a lot to answer for.  One thing in particular is that whenever I see a yellow rose, the song 'The Yellow Rose of Texas' starts running through my head.  I only knew the first two lines though, never got beyond 'is the only rose for me'. 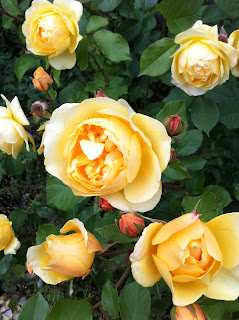 So I decided I would write a blog post about the song and illustrate it with the yellow roses that I grow.  The one above is Rosa 'Graham Thomas'.  This is a great rose, a lovely yellow that fades rather wonderfully as it gets older.   It is about four foot tall and a strong grower.  I have this in my front garden and it is a real joy. 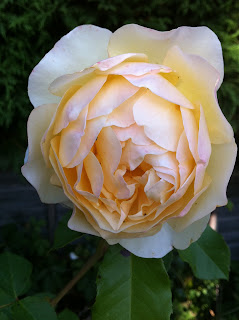 So back to the song.  I looked it up on Wikipedia and found the origins of the song are a folk song about how Emily D West (or Emily Morgan) helped win the Battle of San Jacinto in 1838 in the Texas Revolution.  So far so good.  The first published version dates from 1858 and it has been around in various different guises every since.  However, when looking at the original lyrics it starts to bear not too close examination.  Let's just say times have changed and the lyrics thankfully have as well.  The story of the song can be found here: 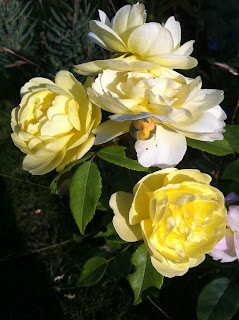 This is Rosa 'Blythe Spirit', I have already written a blog post about this rose, but it is the other yellow rose that I grow and it is really doing well this year.  Last year was its first year in the garden and I think it sulked a little, but now it is growing strongly. 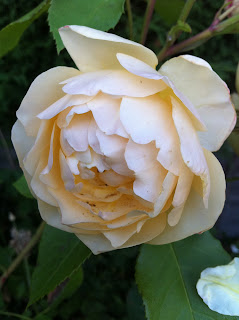 Apparently the song was recorded and released by Mitch Miller in 1955, displacing Bill Haley from the number one spot.  My father would have been 19 in 1955 and maybe this is why he sang it so often.  It is certainly a song I have inherited (along with a variety of  songs by Tommy Steele, Guy Mitchell and don't even get me started on Frank Ifield!)

I shall still sing no further than the second line, but at least I know the history of the song now which is quite a fascinating story about Emily D West who you can find out more about here