A Tale of Two Gardens 2 - the Veddw

July 10, 2011
The first half of this fine day was spent at The Laskett, (see previous post), I say fine day, there was some rain but in the afternoon the weather cleared and the sun came out. 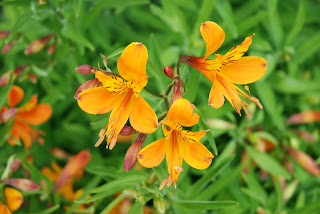 I drove in a small convoy to the Veddw.  Sat nav failure meant I would have struggled to locate it on my own so I was grateful to follow someone, though for part of the journey I wasn't 100% I was following the right car!

Anne Wareham and Charles Hawes, our hosts and owners of the Veddw had arranged for a picnic lunch.  We brought a variety of things with us (Chocolate and ginger cake was my contribution) and we had a lovely relaxed lunch where we had time to actually talk to each other and get to know each other a little better. 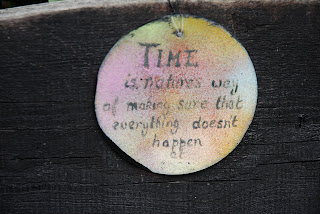 I must admit though, I was desperate to wander off around the garden.  I had seen the photographs in the Stephen Anderton book 'Discovering Welsh Gardens'  (never expecting that one day I would be meeting the photographer for the book, Charles); and I had read The Bad Tempered Gardener written by Anne (see previous post) so in some ways I thought I knew what to expect.  Oh how wrong was I! 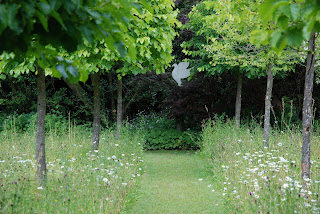 Yes obviously the photographs showed the garden, but the scale and structure of it was not so easy to imagine.  The front of the house has formal elements and a meadow area.  I loved the meadow, it was not large but stunningly beautiful in its simplicity. 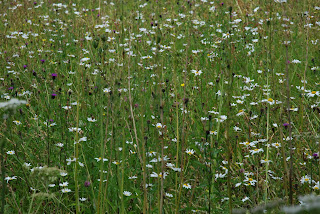 The rear of the house is largely structured through hedges surrounded by woodland.  It fits into a bowl in the landscape so that you walk around the top and then wander through the hedges, finding your way into rooms and areas. 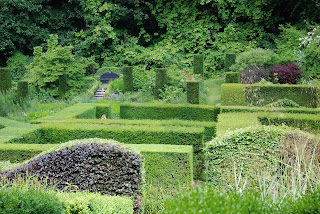 Did I like everything about the garden?  Well in truth some of the planting in the hedge rooms would not be what I would choose.  To some extent I felt at times that the hedges were the point and any planting in between was distracting.  This is however just quibbling.  It is also fair to say that some of the planting altered some of my plant prejudices.  I have long disliked alchemilla mollis, but the frothy mounds of this plants were quite stunning.  I think I might have to get some now..... 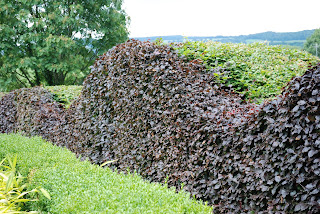 The garden feels very green, apart from the bits which are not and there are flowers aplenty.  The use of colour and texture is clever and is a theme that runs through the whole garden. 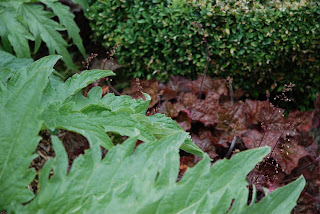 Colour is often kept to the foliage but then you turn a corner and find a bench or the reverse side of a wall and there it is .... 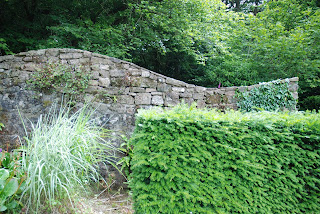 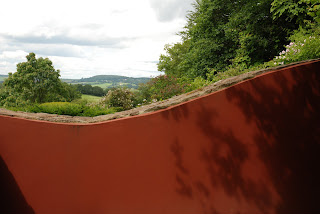 I really enjoy the feeling of discovery and I moved through the garden.  Not everything is obvious and you have to explore it piece by piece.  Walking behind the wall in case something is there, listening to the sound of water and turning corners until you track it down. 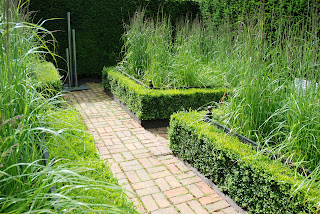 There is a lot of play of light and dark, this also works incredibly well.  I felt like I spent the time emerging from one area to the next, then sitting on a bench and just enjoying the incredible peace.  Unlike the Laskett there are seats a plenty, it feels like a garden you should sit in and enjoy (preferably with a glass of red). 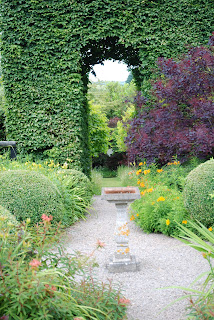 One thing that always strikes me when I visit a garden I have read about is that the one thing that is not (and probably cannot be) conveyed is the sense of scale.  Some areas in these gardens are really quite small.  As a suburban gardener, like a huge amount of gardeners I do not measure my garden in terms of how many acres.  So when I look at the glossy magazines/books I often sigh wistfully and wish I had the space to garden with imagination.  When I visit these gardens I find that the actual view that is being shown is not that big, it could be replicated (should you wish to) in your own garden and actually it turns out that size might not matter so much after all and that what limits me is not the space available but my imagination and courage.

Finding my way around the Veddw was a real joy and a different experience from The Laskett which I enjoyed in parts, but was disappointed with.  This could be because I had not built up such expectations of this garden, but I had noticed it in garden writing and had it on my mental list to seek out; so it was not that I went there cold without expectation.  I came away wanting to return, I had found a real gem.