Its enough to make a Maiden Blush

July 14, 2011
"He was in the garden smelling the gillivers and looking at the plants,
when the girl came out quickly to the heap of coal which stood
by the fence.
"I suppose these are cabbage-roses?" he said to her,
pointing to the bushes along the fence.
She looked at him with startled, big brown eyes.
"I suppose they are cabbage-roses when they come out?"
he said.
"I don't know," she faltered. "They're white with pink middles."
"Then they're maiden-blush.""
http://www.online-literature.com/dh_lawrence/sons_lovers/6/ 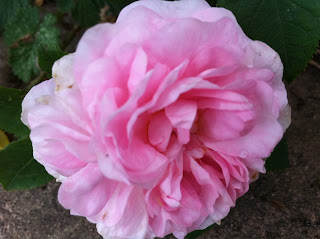 I grow Rosa 'Maiden's Blush' outside my kitchen window.  When I moved into this house there was a strange ivy covered lump, about three foot tall outside the kitchen window delightfully growing in my wonderful retro crazy paving (this is my attempt to make my crazy paving sound funky and cool - did it work?).  I carefully removed they ivy hoping to find a statue or something really exciting, what I found was a rotting tree stump which fell apart when I touched it.  So I decided to grow a rose there instead.

I wanted to grow this rose because of the mention in Sons and Lovers.  I am not actually a huge DHL fan, but he is probably Nottingham's most famous author; though Alan Sillitoe could argue with that and I have certainly read more Sillitoe than DHL.  (see previous post 'Saturday Night and Sunday Morning').

It has a good strong scent and it is growing into a really nice bushy shrub rose.  I like it......

Yep - you've guessed it, it has a tendency to be manky; however a different manky from the Rosa 'Souvenir du Docteur Jamain' referred to in a previous post. 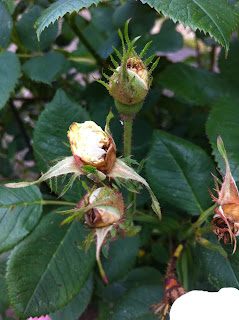 About a third of the buds at any one time fail to develop and die before opening.  This is a real shame.  It lessens the amount of flowers on the shrub, but also it spoils the look to some extent as well.

I remove them regularly whilst I am generally deadheading.  It is disappointing though. 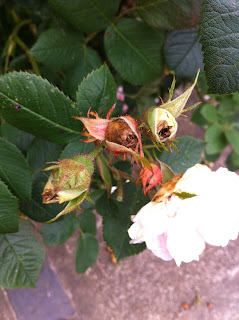 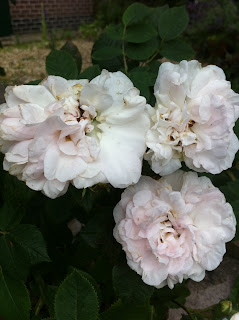 ..... and they do fade beautifully from pale pink to an almost white/pink.