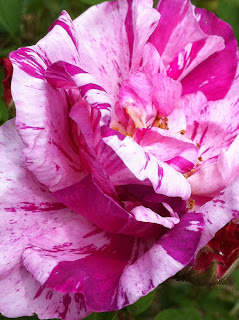 I have never really liked stripey plants, I have very few varigated varieties in my garden.  I used to lump Rosa Mundi into this category, seeing it as a splodgy rose and I could not imagine how it would fit into my garden. 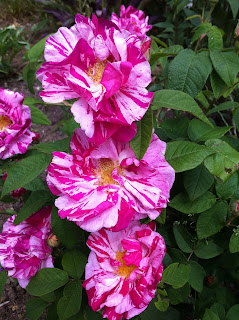 Rosa Gallica 'Rosa Mundi' is a very old cultivar, dating back to the 16th century.  The gallica roses are native to Central Europe and it is a very hard and robust plant.  Mine does not suffer from blackspot and it flowers for a long period of time.  It is currently covered in buds, open flowers and flowers just gone over.  It needs regular deadheading but responds well to this by producing ever more flowers. 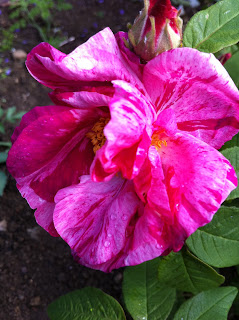 It has a lovely scent.  It isn't as strong as some, but it is enough to make it into the garden.  I do have a rule that I only buy roses with scent.

The Fair Rosamund (John William Waterhouse 1917) is a painting of Rosamund Clifford (1150 - c11.76).  Rosamund was the mistress of Henry II.  She was also known as 'the Rose of the World' and was famed for her beauty.   The name Rosamund possibly came from 'Rosa Mundi' - Rose of the World and one legend says that the rose Rosa Mundi is named after her and allegedly sprang from her tears as Henry went off to war without her.  Stories say that Henry kept Rosamund in a tower, surrounded by a rose bower, that was hidden in a labrynth.
The affair with Henry became public and Rosamund was sent to a nunnery in disgrace.  There is a holy well at Blenheim Palance that commemorates her as it is close to the bower where she resided.  Rosamund was buried at Godstow Nunnery but her grave became an unwanted shrine so her bones were removed to outside of the nunnery. 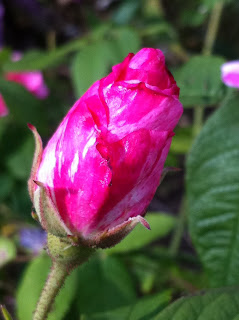 This is not the happiest of stories for the naming of a rose, the beauty of the Fair Rosamund led to her eventual downfall and disgrace.  It is however a beautiful rose; currently I only have one as I was cautious not being certain whether I really liked its stripeyness or not.  I am now definite and I will be planting more in the autumn without a doubt.