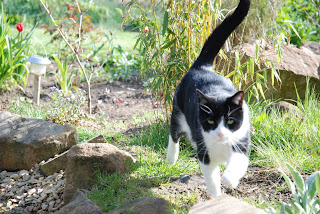 Matt is my garden companion cat.  When I am outside, so is he.  If I want to take a photo he quite often appears out of nowhere to take centre stage. 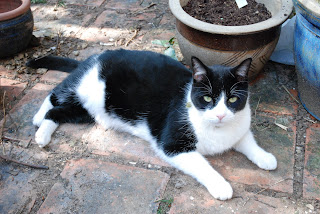 Matt is a large, generally rather placid cat.  He is only six years old and was abandoned in the front garden of the previous house I lived in.  (See post titled Nemesis for a description of that garden).  Matt was one of the few good things to come to me from that period of time. 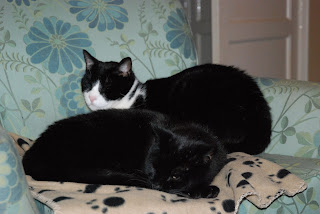 I had three cats of my own before Matt came to live with me and they managed to have a reasonably peaceable existence together.  This is Matt with Lawrence, a rare photograph of them together I admit, but it shows they rubbed along OK.  (Austin on the other hand was not keen on Matt, she remained scared of him even though he totally ignored her). 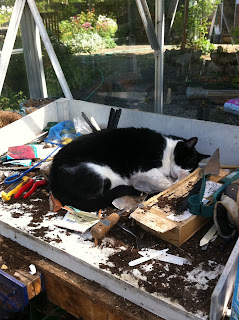 Matt loved the garden and he loved company.  If I was in the greenhouse, he invariably was too.  Matt had a knack of being comfortable where-ever he was.  He slept in all sorts of odd places, but this year in particular the warmth of the greenhouse was a firm favourite.  As you would expect this meant he got shut in several times and yet he never seemed to mind.  Sometimes I am not even sure he noticed. 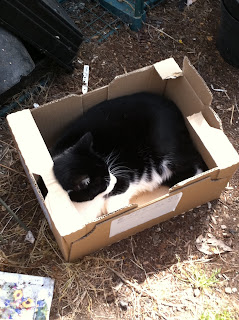 Matt's favourite place in the greenhouse was this box, whilst I was sowing or potting or doing general greenhouse faffing around, there was Matt in his box, happy. 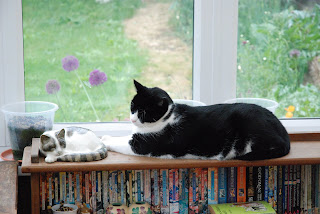 If Matt was human, I always thought he would play rugby, he had the right build to be in a scrum, he was solid muscle.  He was the size of a small dog and was often called 'puppy-cat', he even started to answer to the name 'puppy' lately.

The past tense slips in to this post because earlier this week Matt sadly died.  It was a short, sudden illness, he had an aggressive tumour in his jaw that spread quickly.  Nature took its course with that shattering speed that leaves you in tatters but was better than prolonged suffering (that is always the hope anyway).

I shall miss Matt very much.  He was a part of my garden, always there and I want to make sure that it remains so, so now to choose a plant to plant in his memory.