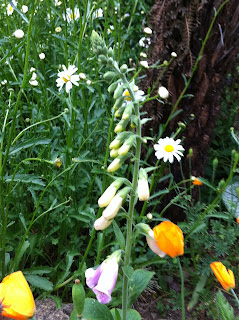 As mentioned in an earlier post, I have a great fondness for plants that self seed.  Foxgloves are an important part of my garden and key to that is their ability to self seed where they fancy. 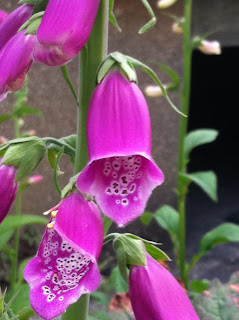 I can't remember ever buying a foxglove.  The ones in my current garden are descended from seedlings that came from a previous garden, self seeded into containers.  This year in particular I have a really good show of them and I am really pleased. 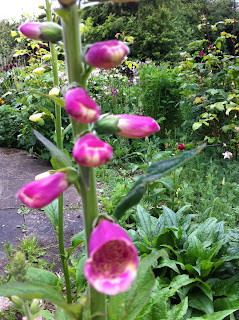 I do edit the seedlings, partly so that they are not too cramped, but also to ensure I have some where I want them if none are showing yet.  This does mean that overwhelmingly my foxgloves are the standard digitalis purpurea though I am have some paler ones this year.  They have started off with cream buds and opened to a flush pale pink colour.  Rather lovely! 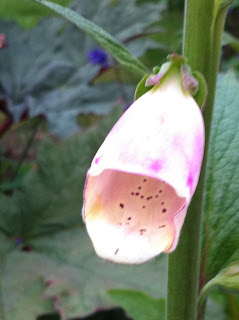 Foxgloves are not just a pretty face.  They have medicinal uses, particularly used in relation to cardiac issues.  They are also toxic when taken in excess and can have fatal consequences.  When I was a child I used to love watching bees climbing into the bell/glove and listening to them buzz louding as they gathered pollen.  I used to put my fingers into the flowers to make little finger-gloves for myself.  I remember wondering why they were called 'fox' gloves and not 'bee' gloves as I was not aware that foxes wore them. 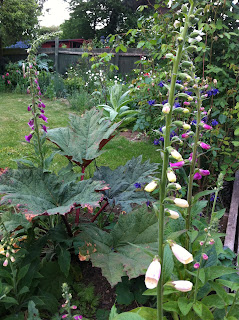 This is taken from Wikipedia:
There have been many suggestions for the derivation of the name "foxglove". According to the 19th century book, English Botany, Or, Coloured Figures of British Plants:
Dr. Prior, whose authority is great in the origin of popular names, says "It seems probably that the name was in the first place, foxes' glew, or music, in reference to the favourite instrument of an earlier time, a ring of bells hung on an arched support, the tintinnabulum"... we cannot quite agree with Dr. Prior for it seems quite probable that the shape of the flowers suggested the idea of a glove, and that associated with the name of the botanist Fuchs, who first gave it a botanical name, may have been easily corrupted into foxglove. It happens, moreover, the name foxglove is a very ancient one and exists in a list of plants as old as the time of Edward III. The "folks" of our ancestors were the fairies and nothing is more likely than that the pretty coloured bells of the plant would be designated "folksgloves," afterwards, "foxglove." In Wales it is declared to be a favourite lurking-place of the fairies, who are said to occasion a snapping sound when children, holding one end of the digitalis bell, suddenly strike the other on the hand to hear the clap of fairy thunder, with which the indignant fairy makes her escape from her injured retreat. In south of Scotland it is called "bloody fingers" more northward, "deadman's bells" whilst in Wales it is known as "fairy-folks-fingers" or "lambs-tongue-leaves".  ( Lankester, Mrs. (1866). Boswell J.T.. ed. English Botany, Or, Coloured Figures of British Plants (full text). VI campanulacae to verbanacea. Sowerby J, Smith C, Johnson J.E, Salter J.W. (III ed.). London: Edward Hardwicke. pp. 128.)

So apparently foxes don't wear them and I feel that a little bit of magic has just been put out in my life. 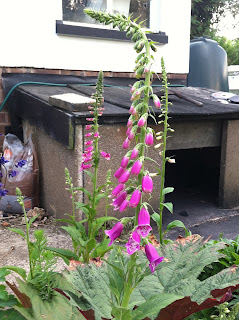 Best foxy song -  with a nod to Waynes World because I always think of Garth when I hear this. #happysigh