It turns out that not all gardens can be saved.  Or at least some gardens cannot be saved by a specific owner due to the weight of issues mounting up against them.

I moved into this garden in Spring 2006.  It was always a temporary move and that was problem number one with the garden.  I had no idea how long I would be living there, whether it would be six months or three years, but I knew I would be moving again relatively soon. 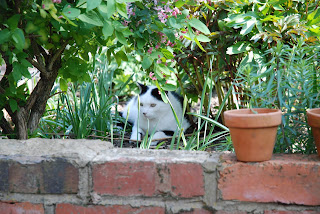 Issue number two, this garden more than any other I have ever experienced, was not mine.   Usually I have moved into a house and the garden is obviously a legacy of the previous owner, but it is immediately mine and I start work to shape it how I want.  This garden never felt like it was mine.

I started on the front garden first of all.  It was a beautiful Victorian villa, an end of terrace in the city centre.  The house had the largest rooms I have ever seen in a house and for a city centre garden it was a reasonable size.  Because it was a corner plot that helped too.

The front garden was a litter trap and along the side of the house were lots of spikey thorny shrubs.  I was advised to leave these alone as they would deter working girls from use the side of the house for their trade.  I was also advised to wear thick gloves when working in the front garden in case there were any needles discarded in there.  (thankfully there never were).

I planted a magnolia and some acers in the front and some bulbs and a rose.  It looked quite nice and certainly more looked after when I had done.  So I turned my attention to the back garden. 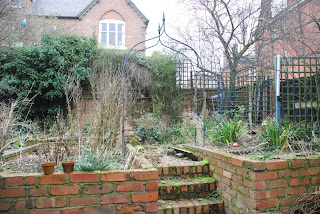 The back garden had a large formal brick lined pond with koi carp in it.  The garden was terraced and rose up quite a steep bank and there was death-inducing slippy decking.   There had been a start of designing the back garden which involved brick edged parterres with gravel paths.  I have to admit I hated it.  It was far too formal for me and constraining.  Still, I began to weed it and clear out the years of weeds that had accumulated and I made quite good progress.  There were some nice shrubs and a rather stunning climbing rose that grew close to the back gate.

I cleared a bed to grow vegetables in.  But the high brick walls made it shady and it was difficult for them to thrive.  I planted various perennials in the other beds and tried to keep it nice but the motivation just wasn't there.  I did not like this garden, no matter what I tried to do with it I could not make it feel like mine. 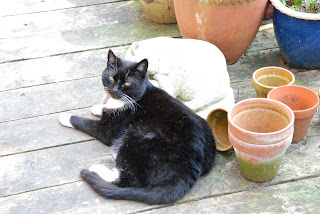 I was very grateful that I only lived there a year, by that point I was desperate for a garden I could call my own and could shape to what I wanted.   I was so glad to move into my current garden which is described in the earlier post of introduction to my garden (10/02/11).

and for now that's it.  I am sure one day I will move again and have a whole new garden to conquer but I cannot see that happening in the foreseeable future.  There is so much I want to do with where I am now unless something remarkable happens I will be here for a few more years yet.

The postscript to this post is that the house was sold a couple of years after I left it.  I made the mistake of driving past recently to see that the front garden was now largely gravel though I think the Magnolia Stellata was still there.  The back garden is now a car park.  Whilst I never got on with the garden, that made me sad.  A bit more city centre space turned over to concrete.