Love in a mist

It is Nigella time in my garden.  It is currently in all three stages.   I have some that are in flower, some that are old seed heads from last year and some seedlings just starting out. 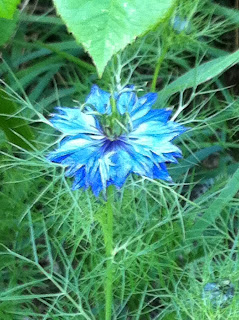 It is also known as Love in a Mist, or apparently sometimes Devil in a Bush, clearly a flower of extremes.  As a hardy annual it is such a useful plant, the ferny, fragile foliage is beautiful in itself.  The flower heads come in a range of colours from creamy white, to pink, to pale and shocking petrol blue.   The seed pods are beautiful as they swell and eventually go papery and brown.  They look like balloons of seeds and they spread themselves around very efficiently.  I am not a flower arranger, but I see the seed pods in particular used regularly to great effect. 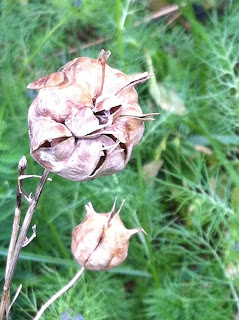 The final bonus is that the seeds can have culinary use too.  I admit as a nervous soul I would buy them from a shop rather than use ones from my garden, but it is just a good all-round doer! 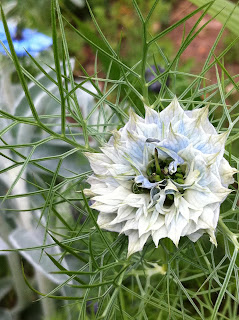 Nigella is one of my favourite self seeders.  I happily let it rampage around my garden, editing out the ones that are not where I want them but letting colonies thrive untouched.  It finds the awkward gaps and fills them with colour.  I am grateful for the creativity of nature that provides such good planting combinations. 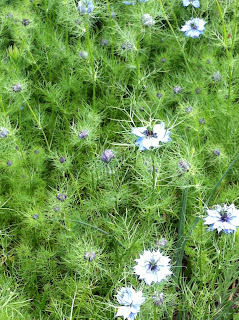 I buy the odd packet of seeds every now and again, just to keep them topped up and to add some new colours.  But by and large it is now self sustaining and I just sit back and let them do their stuff. 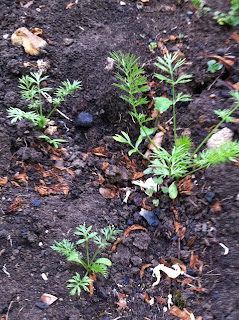 I do have a confession and an apology though.  Many years ago, when Nigel Lawson was Chancellor of the Exchequer, it was the first time I had heard the name Nigella in relation to his daughter.  I did not know it was a name I thought they were being rude and that she was basically a 'little Nigel', same as if her father had been called Geoffrey they might have called her Geoffella.  So when many years later I found out it was a flower I was fascinated to see it and have grown it ever since. 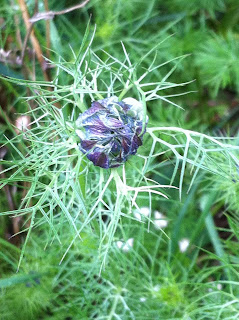 So - sorry Nigella, I didn't understand what a beautiful flower you are named after. 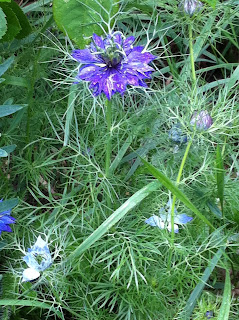