Gardens I have lived with Part 4
This next garden was really quite large.  It was a ‘good address’ (!)  We bought the house after I spent an afternoon leafleting the south facing side of the road asking if they wanted to sell their house.  One person replied and we bought what I thought was the house of my dreams.  A large four bedroom detached house with plenty of space for two growing children.  What we had not allowed for was the huge rise in interest rates that led to our mortgage doubling  in cost in a matter of months.  It was not a good time.  It became an albatross around our necks that nearly drowned us.
One of my first garden tasks was to remove two huge conifers.  I have to say this right here, in general I am not a conifer fan.  I think them dull and boring, just large green cones that sit there.  Obviously there is more to conifers than this – I love my gingko trees beyond measure.  These two particular conifers, one blocked out the light to the front of the house and the other was smack in front of the kitchen window.  You couldn’t see out at all, so it had to go so that a) we had some daylight and b) I could see the children when they were playing out in the garden.
The garden was largely lawn.  There were some fruit trees including a bramley apple tree.  It is a tree I cannot be without. 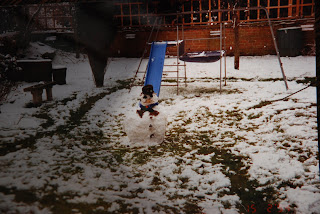 Significant planting for that garden was the magnolia I planted in the front garden.  I still drive past it when I can and it is now huge and beautiful, it was about 2 foot tall when I planted it.  I remember waiting for the first flower with such excitement.
It also had an amazing wisteria around the kitchen window.  It was very well established and I could not believe the wonderful scent the first time it bloomed when we lived there. 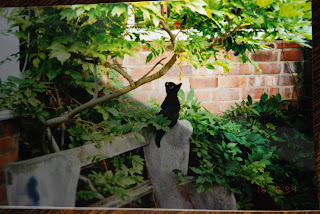 I also planted a ballerina rose in the front garden for my daughter and a silver birch tree in the back garden for my son.  They both loved having a plant in the garden that was for them.  It has become a tradition that any new garden since then has to have a ballerina rose and a silver birch and my now quite adult children know they are with me in my garden.
It was also a bit of a pet cemetery.  There was a couple of cats and a rabbit buried there by the time we left.  We actually, we buried the rabbit twice, the fox kept digging it up and traumatising my daughter by leaving the decaying carcass in the middle of the lawn.  After the last time I binned the rabbit, it might not have been the most sensitive of endings, but it saved my daughter’s tears. 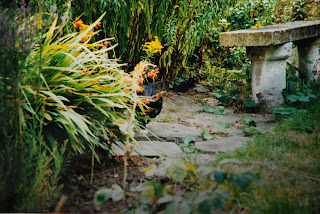 When we moved in there was a pond built into the patio at the back surrounded by a huge clump of bamboo.  Bamboo was not fashionable then and it was a total thug.  We never managed to eradicate it.  We filled in the pond immediately due to parental paranoia about children and water.  We started to fill it in with rubble, when we left the house ten years later it was still just a hole with rubble in it.
Otherwise it was a time of child rearing rather than gardening.  I did my best to shape the garden to what I wanted, and I took real pleasure from some of the plants.  I enjoyed planting flowers/plants that excited me but I had not the time to think it through properly and actually set my mind to it.  It is noticeable there appear to be less photographs of this garden than any other I have had.
When it came time for me to leave I was scared of owning a house and garden to myself, I even considered getting a flat so that I wouldn’t have to garden (can’t imagine what I was thinking now!).  In the end I bought a tiny house with a long thin garden – but that is part 5…….