Where I met a tree or two


Or gardens I have lived with - part 1
I know this sounds silly, but apart from conker trees I think I did not notice trees really until I was nine years old when we moved into a beautiful Edwardian house.  I look back now and think what an amazing structure the garden had had at some point and as a totally non-gardening family it was lost on us.
For a start it had many trees whereas in our previous house I have no memories of any trees at all.  In the back garden were various fruit trees, including two damson trees.  I had never heard of damsons before and none of us had a clue what to do with them.  There were a couple of failed jam making attempts, after that the birds and wasps took the lot.  There was also a large silver birch tree that my bedroom overlooked.  The wispy seeds blew into my room and once I realised that they were not some strange form of biting insect I began to look forward to seed time of year.
In the front garden was a laburnum tree.  I thought the flowers on it were one of the beautiful things I had ever seen.  I used to climb up the tree to sit amongst them until my mother noticed and banned me from climbing the very poisonous tree.  Scared me half to death!
As mentioned before, we were a very non-gardening family.  So, first gardening act, we quickly dug up the beautiful soft fruit/veg patch part of the garden to lay it to lawn so we could have a swing and a climbing frame.  Rhubarb continued to come up through the grass for years.  I think it became lawn all over so that we could play football and cricket.  (Can I mention now how much I still dislike cricket?) 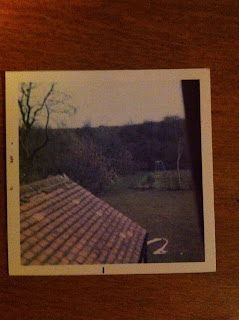 (excuse the photo, I was nine when I took it)
Second gardening act was my father pruned the trees in the front garden.  I say pruned, he hacked huge chunks off them until there was nothing left to remove.  Strangers actually came to the front door and complained about the damage he had done.  When we finally left that house about twenty years later, they had just about recovered.
Third gardening act was to plant a magnolia in the front garden.  Our one gardening kindness to that house.  I drive past that tree when I am in the vicinity to check on its progress.  It is still beautiful and a fine legacy to leave behind.
Oh and don’t think we only did bad things outside, we also had the amazing tiled fireplaces ripped out of every room.  Oops