Gardens I have lived with part 2
My first garden, my very first real garden was a back yard.  I lived on Cycle Road, which was opposite a bicycle factory (who would have guessed).  The film of the Alan Sillitoe classic Saturday Night and Sunday Morning was set and filmed around the area (before I was born can I add quickly!)  If you don’t blink in the opening sequence of this clip, I am sure he is cycling around near to where my house was.
The house opened out directly on to the street, there was precious little greenery around but we overlooked a playing field at the back.  This meant the yard mainly grew footballs that flew over the fence.  The lady who had owned the house before us sowed broken glass into the top of fence to deter ball-collectors – that was removed by us pretty quickly!  There was also in the very shallow border a host of bamboo canes.  I waited for a few weeks to see what they would be supporting.  Nothing ever grew- were they really there to further deter ball-collectors?
So there was this narrow strip of soil.  I planted a few things in it.  I watered them and hoped they would grow in a very unknowledgeable but optimistic way.  I was rewarded by a smattering of green appearing……. 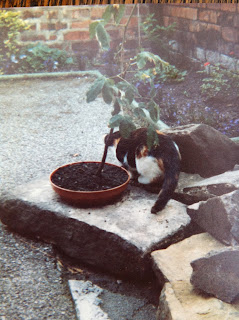 When looking for photographs of that time I found this one and was surprised that it does show more planting that I remember. (Sorry photographs are of dreadful quality - still using the camera I had when I was 9 at that point!)   I clearly kept trying to grow things in a very limited way.  My memory of that time was that the border was largely a burial ground for hamsters instead. 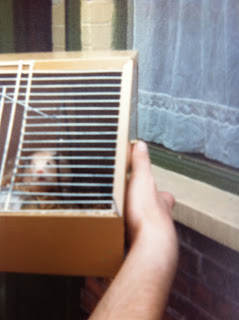 RIP Agatha and Lenin, you trundled in your wheels, you gave birth to the punk and jazz hamsters, you were sadly missed.